A big night at The Ivory for GMcG Group

At a recent event at The Ivory in Belfast’s Cathedral Quarter, over 200 attendees witnessed the launch of GMcG’s new corporate identity. The name and logo for GMcG Chartered Accountants Group were formally unveiled, as well as new logos for its constituent offices of Goldblatt McGuigan (Belfast),Robinson and Company (Portadown) and Hanna Thompson (Lisburn). 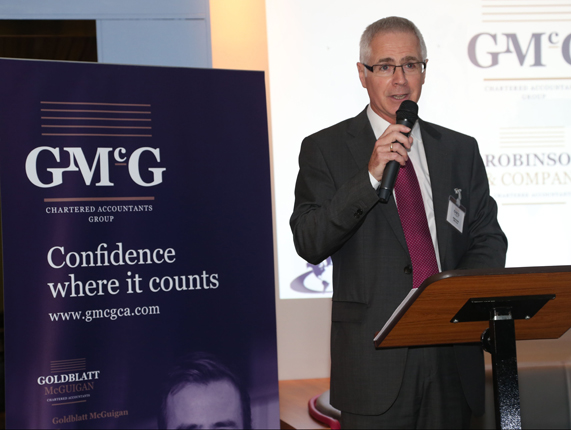 GMcG’s Managing Partner Tony Nicholl unveiled the new identity saying it was an evolution rather than a revolution and that there had been a conscious decision taken to ensure that the new branding would resonate with clients and staff alike.

“The GMcG Chartered Accountants Group brand enables us, for the first time, to appropriately present our Group credentials while at the same time retaining the Hanna Thompson and the Robinson and Company names in their marketplaces. The Belfast office will be the first to rebrand followed by a gradual roll out in the Portadown and Lisburn offices. A new corporate website for all three offices will be launched in Spring 2015”.

The new Group name and branding is an exciting development in the growth and positioning of GMcG Group as one of Northern Ireland’s leading firms of business advisers, a point further enhanced by the unveiling of Goldblatt McGuigan’s membership of TIAG® – The International Accounting Group. TIAG® is a worldwide alliance of more than 115 independent accounting firms located in 200 offices spanning over 60 countries. Together with its sister alliance of over 145 independent law firms in over 85 countries, TAG Law®, the TAG Alliances™ rank as one of the top three independent accounting and legal alliances in the world.

As the only NI accountancy firm selected for TIAG® membership, this marks another milestone forthe GMcG Group and brings with it a distinct advantage for GMcGclients. As explained by Managing Partner Tony Nichollto the audience at The Ivory:

“There is an increased awareness and willingness of Northern Ireland businesses to explore external markets. Expansion into such markets can bring rich rewards, but doing business abroad is often fraught with uncertainty and a lack of access to credible resources.

With access to contacts in the accountancy and legal professions across more than 85 countries, we consider TIAG® to be an excellent resource for our clients’ needs going forward.”

GMcG’s night at The Ivory was also an occasion to celebrate the retirement of former Managing Partner Sam Goldblatt. Sam founded the Goldblatt McGuigan practice on April 1st 1978 and needs no introduction to the business community throughout Northern Ireland and beyond.

While the evening was relaxed and full of laughter, everyone in attendance was mindful that the event marked the end of an era. Friends, clients and staff paid tribute to Sam’s immense contribution not only to the firm but to the wider business and community sectors.Speeches fromGMcG Partner Jackie Smith and Sam’s long-time client and friend Colin Anderson OBE perfectly ‘hit the right note’ with their very personal recollections and reflections on Sam. On behalf of the Partners and Staff, Managing Partner Tony Nicholl presented Sam with a watch.